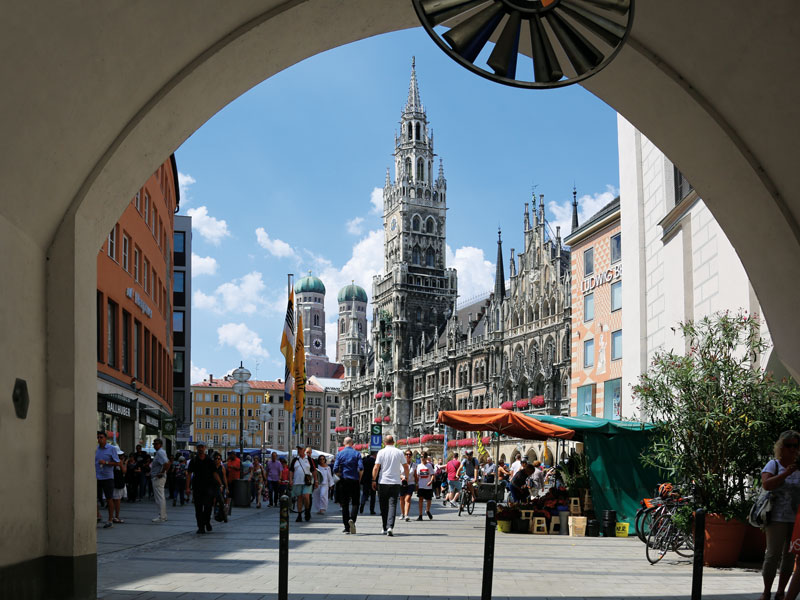 Altstadt, Marienplatz, © NEW IN THE CITY

Bavaria is different. Even people who move to the state from other parts of Germany have to get used to a few Bavarian peculiarities. A beer and lemonade shandy – known as Alsterwasser in north Germany – is called a Radler. A bread roll, usually called a Bröt­chen elsewhere, is a Semmel. The CDU political party is known as the CSU. People say “Grüß Gott” instead of “Guten Tag.” Bavaria even has a different climate and the homes look different and are set amid a different landscape. When you’ve experienced your first headache caused by the Föhn, you’ll realize that even the wind whispers in the Bavarian dialect.

However, Munich and Bavaria are not the same. Munich is governed by the left-leaning SPD and not the conservative CSU, which rules Bavaria. You’ll have to look long and hard to find a beer-bellied Bavarian in Lederhosen in Bavaria’s capital city. Munich only truly shows its Bavarian side during the Oktoberfest. Any other time it’s a cosmopolitan oasis in the tradition-loving state of Bavaria. About 28 percent of Munich’s residents are foreigners, creating a bustling, multicultural atmosphere. Like a giant heart, each year Munich sucks in 120,000 newcomers from all over the world but also pumps out about 100,000 people who leave. The city’s population had remained constant at about 1.3 million since the 1970s but has now grown to a potentially record-breaking 1.55 million.

The population increase is forecast to continue because every year Greater Munich has higher economic growth than other big German cities and it has a high birth rate. Independent of its growing population, Munich has long been considered a boom town and an enduring upbeat mood prevails. The city is an attractive location for many companies and there’s always a large project underway. As a “Zuagroaster” (Bavarian for newcomer), you may ask: What makes Munich the place it is? Well, among other things, it’s you. Step into your new home and bring a little bit of your world with you. But don’t forget to ask for Semmeln, not Brötchen, at the bakers. After all, this is still Bavaria.

Alter Hof, © NEW IN THE CITY

The first newcomers arrived at the banks of the Isar a thousand years ago. Munich has come a long way since then, a way that was sometimes smooth and easy, sometimes hard and rocky. Thus the little village developed into a fully grown city over the centuries - a city with some scars, lots of traditions and a colorful past. We will now take you on a time trip spanning a millenium of Munich history.

Walking through Bavaria’s biggest city today, it is hard to believe, but time travelers going back to downtown Munich in the year 500, would find themselves on a green meadow. There would not be a single building, no road, probably not one human being in sight. The visitors from the future might go unnoticed until around the year 1,000 when the first Munich citizens would probably react to them by saying a short prayer - after all, Munich’s first settlers were monks. It was at this time when the Benedictine Monastery at Lake Tegern opened a small branch on the site of modern downtown Munich. This settlement soon developed into a small village, “Apud Munichen” (by the monks).

Edmund Stoiber’s well-known slogan “Laptop and Lederhosen” aptly points out the symbiosis of the traditional and the modern that is typical for Bavaria and its capital city. On the one hand, there is the cliché of the grouchy old Bavarian who spends his days sucking on veal sausages and drinking beer with his friends at the bar, barely looking beyond his limited horizons.

On the other hand, there is the glittering example of the ever-growing cosmopolitan city of Munich, with its multicultural population and the home of international heavyweights such as BMW and the Oktoberfest – a cultural metropolis and a boomtown. The truth can be found somewhere in the middle. The facts, institutions and endearing traditions listed here provide a brief statistical overview of the metropolis on the Isar; they might also give you a glimpse of the Bavarian soul.

The Föhn wind is a peculiar Bavarian weather phenomenon. It’s caused when warm air on the Italian side of the Alps rises, cools down and loses humidity. As this very dry air blows across to the Alps, it warms up and creates a static-charged atmosphere that allows very clear views. Many Munich people complain of headaches or dizziness during Föhn.