The most beautiful beer gardens in and around Munich

As soon as the lively birds start to chirp their spring songs, the Starkbierzeit (strong beer festival) comes to an end, the weather gets warmer and the first buds begin to sprout, beer garden season is here again at last. In Bavaria the season lasts from April to October, depending on the weather. During this time people gather under the mighty tree crowns to enjoy a sociable beer and a grilled fish or chicken.

Sitting on the long wooden benches under ancient chestnut trees, beer garden visitors happily start their free evenings or weekends. If someone lifts up their glass, then everyone else sitting at the table does the same. It takes a while until you've clinked every body's glass. Only then can the golden liquid flow down your parched throat. This ritual is repeated many times on warm summer evenings in the 100 beer gardens in and around Munich. In this way you can make some nice beer garden friends and hold deep philosophical discussions until the last drop is drunk.

We can thank the Bavarian brewing laws of 1539 for this beer garden culture. The law banned beer brewing in the summer months because of the fire risk. To avoid being left high and dry in the summer, brewers laid down stores of beer in cellars and planted shady chestnut trees above them to keep the barrels cool. Then they started to serve their beer starting the beer garden tradition that’s lasted down the centuries. The old law also ruled that only drinks could be sold in these gardens so another tradition developed that's still valid today. Everyone is allowed to bring their own food to beer gardens, even if there are stands serving hot and cold food..

The Hirschgarten, Munich’s biggest beer garden, is especially popular for a picnic. It has 8,000 seats so you’re sure to find an empty table. You’ll also always find a place to sit in Munich’s second biggest beer garden at the landmark Chinesischer Turm in the middle of the English Garden (7,000 seats). But it can be hard to find an empty table in the busy Augustinerkeller near the Hauptbahnhof. The central location of this quintessential beer garden attracts up to 5,000 thirsty souls at most times. Also it serves Augustiner, Munich's most popular beer. Many of Munich's beer garden are popular destinations for a cycle ride along the Isar river at the weekends, for example the Waldwirtschaft, Menterschwaige or the Aumeister.

Munich’ beer gardens at a glance

Everything worth knowing about beer 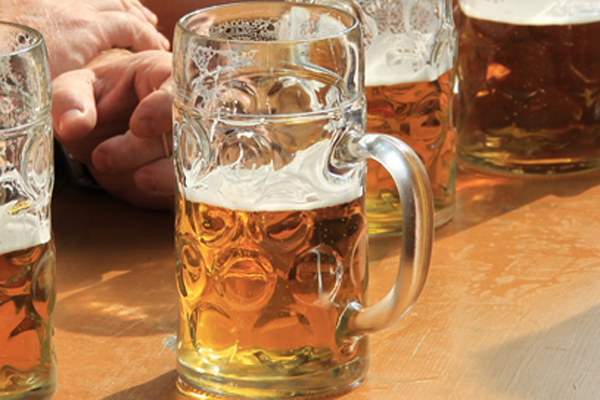 We owe the origin of beer to the accident of someone happening to witness the fermentation process, or more precisely, the good fortune that some bread dough was left standing. Beer’s beginnings date back to ancient times; the Sumerians were already brewing beer between the Tigris and the Euphrates in the fourth millennium before Christ. The Egyptians went to work on unbaked bread dough. The Greeks used barley water for healing purposes and even Caesar is said to have revived his troops with nutritious beer, although the “barbarian” drink was less favored by the wine-loving Romans.

Beer amphorae found near Kulmbach, dating back to 800 B.C., are the oldest proof of German beer manufacture. The oldest existing commercial brewery is Weihenstephan – it received its license to brew and sell beer in 1040 A.D. The Munich monastery was crucial to the development of the brewing arts. In the 14th Century, Augustinian monks brewed their beer under the slogan “Liquida non frangunt ienum” (A liquid does not break the fast). In consideration of their hard work and often meager meals, especially during periods of fasting, beer was considered liquid nourishment; the monks could have up to five servings a day. Brewing success seemed haphazard back then, since people first learned about yeast bacteria from Louis Pasteur. Only then could the bacteria be used systematically. As a result, the brewing process was a mystical affair with elements of superstition and incantation.