I. General Terms and Conditions for Advertisements and Third-Party Inserts in Newspapers and Magazine Publications

1. “Advertising order“ in the intendment of the following general terms and conditions shall be the contract on publishing one of several advertisements of an advertising party or other advertisers in a publication for the purpose of distribution. Advertising orders from agencies shall be accepted in their name and on their account.

2. In case of doubt, advertisements shall be called within one year after concluding a contract.

6. The publishing house reserves the right to accept or reject advertisements or inserts or single orders at its own discretion at any time during the process of concluding a scheduled contract. The publishing house also has the final decision on accepting or rejecting orders that were accepted by its representatives or anyone assisting the company or its representatives. Clients will be immediately informed about a potential cancellation.

7. Orders for inserts shall only be binding for the publishing house after a sample of the insert has been submitted and approved. Clients will be immediately informed if an order is rejected. Inserts that advertise two or more companies will be invoiced as two or more inserts. The publishing house is not responsible for checking the number of inserts submitted. Outsourced inserts must be received by the publishing house within sufficient time before the advertising closure deadline to enable the client to be informed if the order cannot be fulfilled in the manner stated above.

9. The client shall have a claim to reduction of payment or a flawless substitute advertisement if the print is wholly or partially illegible, incorrect or if the print of the advertisement is incomplete, however only to the extent that the purpose of the advertisement was impaired. If the publishing house allows an appropriate period of time set him for this to expire or if the substitute advertisement is not flawless again, the client shall have the right to reduction of payment or cancelling the order. Claims to compensation for damage from positive breach of an obligation, fault when the contract was concluded and wrongful acts, even if the order was issued by telephone, shall be excluded. Claims to compensation for damage because of the impossibility of performance and delay shall be limited to the remuneration to be paid for the advertisement or supplement concerned. The publishing house shall only be liable in commercially organised business transactions with gross negligence limited to the amount of the remuneration for the advertisement concerned. Complaints have to be as- serted within four weeks after receiving the invoice and document.

10. Proofs shall only be supplied upon express request. The client shall bear the responsibility for the correctness of the proofs sent back. The publishing house shall include all corrections of errors that it is notified of within the period of time set when sending the proof.

11. If no special size specifications have been given, the calculation shall be based upon the actual printing height usual for the type of advertisement.

12. If the client has not made an advance payment, the invoice will be sent immediately, but not later than 14 days after the publication of the advertisement. The invoice must be paid in net cash according to the conditions in the mediapack. The time limit begins on receipt of the invoice, unless a different payment date or advance payment has been agreed in advance.

13. If a special price has been agreed upon, the client forfeits any further listed discounts, such as frequency discounts and agency commission.
14. If there is a delay or a respite in payment, interest shall be charged in accordance with our price list and collection costs. The publishing house may set back the further implementation of the current order until payment is made and it may demand advance payment for the remaining advertisements. If there is a justified reason to doubt the client’s ability to pay, the publishing house shall be entitled to make publishing further advertisements dependant upon advance payment of the amount and settling outstanding amounts invoiced even during the term of an advertisement contract without taking the originally agreed-upon date of due payment into consideration.

16. Printing documents shall only be sent back to the client upon special request. The duty to store shall end three months after the order has expired.

19. The client bears single responsibility for the contents and the legal permissibility   for the insertion of the text and art materials that are made available. The client is deemed to discharge the publishing house of any claims by third parties that might arise through the infringement of laws or regulations. The publishing house is not  required to verify whether the legal rights of third parties have been infringed by its accepting these materials. In addition, the publishing house is discharged from the costs of any resulting legal defense costs.

20. Terminations of advertisement orders are not possible.

23. In accordance with §§ 26 and 34 of the Bundesdatenschutzgesetz of 1. 1. 1978 we herewith give notice that we shall be employing electronic data processing for administration and invoicing of the contract. For this purpose we or a third party shall be storing personally applicable data insofar as it is of significance for the performance of the contract.

New in the city?

NEW IN THE CITY –
the city and relocation guide 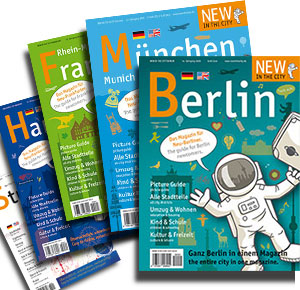